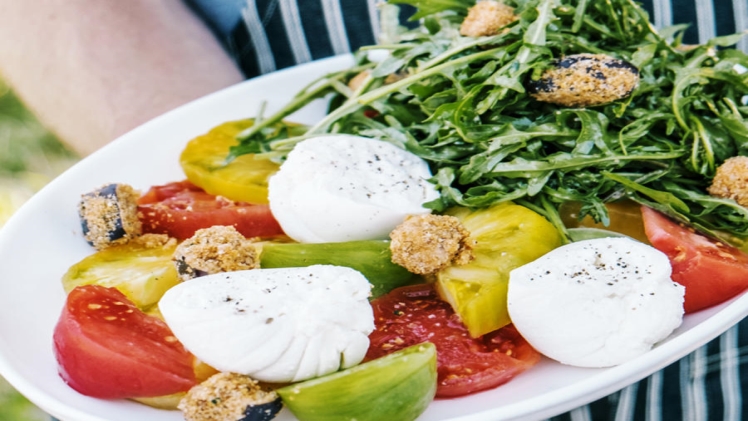 “People are too scared when they make salad,” Waxman told me. “You have to relax, think about ingredients.” This salad has just a few ingredients, and that’s the way Waxman likes it. “People overload salad,” he continued. “They put in mustard, shallots all that crap. But the best salads have the fewest ingredients.” Because there are so few ingredients in this particular salad, source the best you can find (tomatoes are best in late summer).

Tossing them all in the air isn’t just a way to show off; it prevents you from damaging the lettuce and tomatoes with salad tongs. Put the tomatoes and the arugula in a very large bowl. Use your thumb to stop the top of a bottle of olive oil and turn it completely upside down. Drizzle a generous amount of oil over everything until it’s lightly coated.

Squeeze the lemon into the bowl and sprinkle salt and pepper over everything. Now toss: flip the tomatoes and greens on themselves by making a swooping motion with the bowl (much like flipping an omelet). Taste for salt, pepper, and acid and adjust. Serve quickly, before the acid from the lemon wilts the arugula.

Waxman slices around the core of the lemon as you would the core of an apple; this results in lemon segments that are easier to juice and that have fewer seeds. The first time I ever made a seafood stew, it was a disaster. I overloaded a pot with fish and potatoes and left it on high heat for so long that half an hour later, the fish was so overcooked it resembled Sally Field’s performance in Not without My Daughter.

The secret to Waxman’s remarkable fish stew (which he talked me through, improvisation ally, after a fisherman delivered an enormous portion of swordfish) is that you only need to cook it just enough.

The 5 Stages of Kidney Failure